One of the best resources on Sherpa culture produced so far

Lhakpa Norbu Sherpa is a forester and environmentalist who is transforming into a dedicated cultural activist. Through a Sherpa Window is an illustrated volume that is encyclopaedic yet accessible, a guide to Sherpa culture presented as part of a larger drive to sensitise the ‘educated, younger generation Sherpa’. 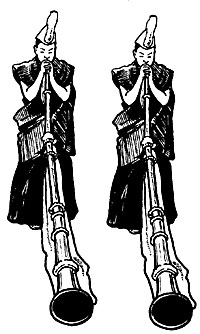 As the High Lama of Tengboche suggests in the introduction, this is ‘an unassuming work that is one of the best resources on Sherpa culture that has been produced so far’.

Beyond English-reading Sherpa youth, the 210-page volume is bound to emerge also as essential reading for tourists visiting not only the Khumbu region, but other high-Himalayan beyuls (sacred sanctuaries). Translated into Nepali, this work could help the midhill and plains population better understand the highlanders. 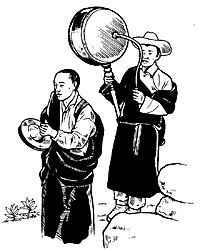 The author’s goal is to try and preserve an understanding of the traditional lifestyle and beliefs amidst the fast-paced changes that modernisation and tourism have introduced to the Khumbu.

The Sherpa practise the original Nyingma school of Mahayana Buddhism, a ‘practical sect’ (writes the author) which shares much with the earlier Bon faith including the worship of spirits of land, water, trees and mountains. Sherpa is pronounced ‘Sharwa’ locally, referring to the people of the east, a reference most likely to origins in the Kham region of eastern Tibet.

Back in 1965, all the roofing in the main Khumbu market of Nauche (Namche) consisted of traditional materials, including slate, wooden slats and bamboo mats. By 1995, every house had corrugated metal roofing, which changes the look of the village ‘but saves a lot of trees’. 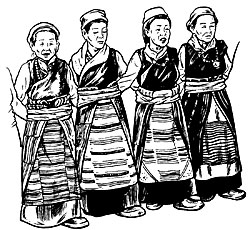 Traditionally, people carried their own gokpur wooden eating bowls during travels, within the folds of their tunics. No longer. The Sherpa are used to composting human waste, but with the changing economy (decline of farming and arrival of tourists) things have become unmanageable.

The Chinese thermos, the Korean blender and Indian pots and pans are sidelining local utensils. There is an interesting chart showing how the earlier barter trade between Khumbu and Tibet is now exclusively a one-way affair, with imports of ‘electronics, carpets, meat, tsampa, butter, noodles, cement, iron products and silver cups’ in exchange for simply, ‘cash’.

Polyandry and polygamy are both in swift decline, we learn, with the additional information that the former is good family economics, while the latter is favoured by aristocrats. ‘Unlike polyandry, polygamy generally leads to conflicts and unhappiness.’

While the transformations are obviously a key concern of the author, the bulk of the text is devoted to explaining the aspects of Sherpa folk and high culture, lifestyle, household and terrain.

What the Khumbu children fear the most is the gobkyokbuk, the dark passageway leading into the main family room of Sherpa houses, where ghosts are said to lurk. Ama Dablang, arguably the prettiest mountain in Nepal, is so named because it looks like a mother wearing a charm box (dablang).

The author’s scientific temperament is obvious when he deals with the natural world. He explains the difference between yak (male), nak (female), zopkyok (cross with lowland cow), and the more than a dozen resulting permutatons in progeny. Potato is the staple of the Khumbu today, stewed, mashed, fried, curried and roasted. And yet it is an interloper from the Andes, arriving less than 200 years ago.

Buckwheat (thrau) was probably the earlier staple, but its cultivation has declined because of browsing animals. Why so? The author describes how tourism led to the end of transhumance and the arrival of crossbreeds, resulting in the collapse of community control over livestock movement.

The book presents the definitive explanation for the name Jomolangma (Sagarmatha/Mt. Everest): it is a shortened version of Jomo Miyo Langsangma, one of the five female sister deities of the Himalaya. She provides the boon of food and nourishment.

With fine illustrations by Krishna Gopal Shrestha, with lists and tables that help in the explanation, the book also comes with an index and select reference for further reading. This is such a successful volume that the reader will want to know more.