Somewhere in international waters, close to the Pakistani coast, a Predator drone is launched from the USS Abraham Lincoln. The pilotless craft heads up over the beaches of Balochistan, and points its snout towards the Pashto-speaking region further north. Operated by a joystick back on the aircraft carrier, the drone homes in on what ‘intelligence’ has identified as buildings housing Taliban and/or al-Qaeda commanders and sympathisers. Real-time images from the drone and other spy aircraft circling overhead provide the operator with the support he needs to put the target within the crosshairs, and ultimately to release the Hellfire missile that is attached to the Predator’s underbelly. Hundreds of miles away on the high seas, from his darkened workstation, the operator watches the flat screen as the missile hits. There is a soundless puff of dust and smoke. Mission accomplished. 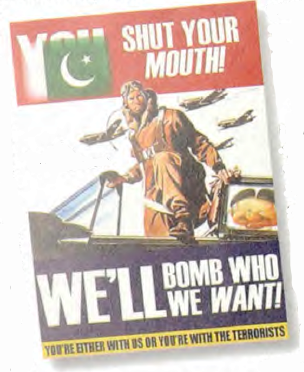 Dozens of children, women and men are killed in the attack, scores injured. Perhaps a Taliban leader or an al-Qaeda sympathiser is caught amidst the rubble. But what of the innocent Pakistanis that die as a result of this dehumanising warfare? Is there a war crime here or not? Should not the anti-war intelligentsia of Southasia be joining hands to put up a sober protest against this attack on innocents in North and South Waziristan? Why are the peaceniks of Southasia not organising to protest this macabre death-by-drones, willed by George W Bush and supported by Barack Obama – the latter used the word ‘kill’ more than once in his presidential campaign in relation to Afghanistan-Pakistan. Evidently, it is politically correct to look cruel and tough when the topic turns to this part of Southasia.

Since August, the US has launched at least 20 missile attacks from bases in Afghanistan or ships in the Indian Ocean. They have used either precision-guided, ground-launched rockets or missiles from Predator drones. On 13 November, a missile killed 12 people, and the Associated Press reported that “there was no immediate indication” that those killed were senior militants, as if it would be okay to kill innocents as collateral damage if senior militants were also among the dead. On 24 October, a missile killed nine at an ‘Islamic school’ in North Waziristan, which presumably means that there were youngsters at the scene. The target was a onetime anti-Russian veteran mujahideen, who had started this madrassa with US support back in the 1980s. That strike arrived close on the heels of a ‘manned attack’ by helicopter in South Waziristan, where 20 were killed, “including women and children”. Including women and children?

It requires the cricketer-politician Imran Khan to say it like it is, speaking at the International Institute for Strategic Studies in London: “The way this war is being fought is like putting out fire with gasoline. They end up radicalising the youth, they create a new phenomenon: the Pakistani Taliban. Just as in the Muslim world the ‘war on terror’ is considered a war against Islam, in the tribal areas it is considered a war against Pashtuns.”

Yes. Why are the Pashtun considered fair game for these missile attacks? Why is it okay for missiles and rockets to drop out of the sultry night sky on their mud-brick houses and courtyards? Where is the courage of the stalwart American generals when they go after extremists without a thought for children, the elderly, women and innocent men? You can engage in such actions only when you consider the civilian targets to be something less than human.

The sanitised warfare that saw the raining of ‘smart’ bombs on the populated quarters of Baghdad in 1991 and 2003 is continued in its gruesomeness today in the northwest of Southasia. And all of us consumers of television reports seem to lack the requisite imagination to interpret this kind of warfare, including all of us consumers of television and press reports. If we do not protest, we Southasians are as culpable as the American commanders and joystick-wielders. The truth is, we are fixated on the flight of the sleek Predators with their bulbous snouts, and think little to nothing of the rubble afterwards. For some reason, we are never shown the dead, and we lack the ability to imagine the pounding, the collapse of walls and ceilings, and the wails and moans.

When Maulvi Omar, the spokesman for the Tehrik-i-Taliban Pakistan, reports that four Taliban and three children were killed and six others wounded in a strike, we are programmed to think that that is okay, because four of the extremists were killed. If the al-Qaeda ‘foreigners’ (Uzbeks, Arabs, Chechens) were not killed, then we expect that perhaps the local Taliban sympathisers were. When the home of the Taliban commander Maulvi Obaidullah was targeted, please understand that it was a home. And a home is bound to shelter family – daughters, sons, wife, relatives, retainers, household help.

States the news dispatch from the latest killing terrace: “The United States rarely confirms or denies such attacks.” Well it might not. The shame of it all, and the shame of the rest of us.