In a short film the director has to grab the audience and be done with the plot by the time the average Nepali audience is just settling down for the three-hour Bollywood or Kollywood blockbuster. 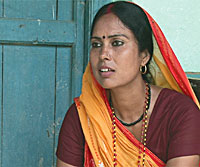 Deepak Rauniar is obviously as courageous as he is capable. This is clear from his 31-minute directorial fiction debut Chaukaith, which opened the Kathmandu International Mountain Film Festival (KIMFF) yesterday.

At no point does the director lose his hold over the camera, script, editing or actors. His masterpiece production will surely inject energy into the genre of short films in Nepal.

The writer-director-editor has weaved a subtle plot where an urban woman, a census enumerator (acted by Asha Magarati), visits a Maithil household to find a young mother alone with her chores. The story is about how, during one afternoon and evening, the social horizons open up for the woman (Ranju Jha).

The strength of the production lies in the powerful and understated acting, a script which constantly shuns melodrama for subtle suggestions, and editing that shows complete grasp of the medium. Frame to frame, the camera expertly catches the close-contact dialogue, the downward gaze and timid glance, the little world of the courtyard and indoor spaces, the progressively setting Tarai sun in long shot.

The film is essentially carried by Jha as the central character, whose relationship with the camera is confident and natural, making every scene a joy to watch.

The observant viewer will note how Jha’s ghunghat (ghumto) recedes from the position of a purdah to nothing but an afterthought as the camera follows her growing self-realisation. After continuous attempts to maintain distance, sister-bonding comes instantly when Jha, having invited Magarati into her kitchen, burns her fingers on the kadai.

At every turn, Rauniar shuns the melodramatic potential in the plot. It would have been easy to turn the shopkeeper husband into a mysogynist ogre, and one is programmed to expect so. He certainly emerges as the male living by the dictates of his culture and desires, but also comes across as a well-meaning family man rather than a vile caricature.

What was a production rooted firmly in the plains doing as the opening feature of a mountain film festival? One would hazard a guess, that it has to do with the subtext about mountain-plains harmony. At a time of a sudden distancing between the hills and plains societies of our country, Chaukaith quietly makes a call for reciprocal appreciation. This is done with such grace that the message becomes embedded without the viewer realising it.